“Athletic” is a word that is often applied to cars that at least try to look exciting and fun to drive. An athlete is defined as one who is trained or skilled at activities requiring physical strength, agility, or stamina – so it’s not an inappropriate term, especially when used to describe cars like the 2022 Chevy Camaro. Some performance-oriented vehicles are about stamina, doing hard work for years on end, but most “athletic” cars that we tend to think of are more about demonstrating strength and agility – about the 0-60 time, lateral grip, and track records.

The pony car class – those affordable American sports coupes – has always been driven by equal parts image and results. Make no mistake that the results were there, but only a fraction of the Mustangs, Camaros, and Challengers ever built fully realize the potential of their construction – base models in particular focus on the look, sound, and feel of the muscle car without delivering performance to write home about. It’s like the bodybuilder class of cars, more about form than function and occasionally resplendent with overkill, but a look at this segment’s top performers can tell a different story.

The most prototypical headliner in the segment is the nearly-800 hp Challenger Hellcat Redeye. Sure, the power is there, but it lacks all semblance of control over that power and therefore can only perform so well in any kind of race. It’s a powerful slugger with no hand-eye coordination and a middling sprint speed, so it isn’t a competitive option for generating results.

The Shelby GT500 Mustang used to be that way too, but Ford has turned things around in the latest iteration of the monstrous Mustang. Finally capable of handling its weight and power, it is a surprise in its field, the big man Prince Fielder busting out an inside-the-park home run against all expectations. But the superstar performance costs a pretty penny compared against the Camaro ZL1 1LE. It’s lighter, quicker to accelerate from 0-60, and can squeeze turns just a little bit harder, for nearly 20% less money (at least that’s how it was pre-chip shortage). Call it the NLCS MVP Eddie Rosario next to the Mustang’s Fielder in the baseball analogy.

The ZL1 is already a precision machine, but it’s the 1LE extreme performance package that turns everything up to 11. Versions of this package have been available on nearly all trim levels, but in 2022 it’s limited to SS and ZL1 trims, which is a shame because reviewers always recommend it. It’s so good that if you had to choose, it would be worth downgrading your trim level to spend the money on the 1LE package instead! One nice thing about this performance package is that it comes without compromising the features available on the standard ZL1 Camaro. The spirit of the 1LE is additional, not substitutional, to the Camaro that it goes on. This means features like heated and ventilated seats are still included on the ZL1 1LE, even though removing them might enhance performance. Performance-variant manager Matt Scrase even wanted to remove the trunk liner to save weight but was blocked from doing so to avoid creating a trade-off. So nothing is lost by upgrading to the 1LE. What’s more is that the obvious question, “What do you get in the 1LE package?” has a short answer – “a lot” – and much of that is on full display as soon as the car pulls up to a starting line.

The ZL1 is easily identified thanks to aggressive side skirt and front fascia designs, plus a body-color spoiler and a hood with an insert to cover the 1.7L Eaton supercharger mounted to the 6.2L LT4 V8 engine (the same engine found in the Z06 C7 Corvette and Cadillac CT5-V Blackwing). It’s a cool look, but the 1LE package takes it straight into race car territory with functional aerodynamic features in the front and rear. The front splitter is larger, and pronounced dive planes on either cheek ensure those front wheels stay firmly planted on the ground.

Both give the 1LE a truly menacing appearance when combined with the satin black wrapped hood and, more significantly, the weight-saving carbon fiber hood insert. But perhaps nothing stands out quite as much as the carbon fiber rear wing, which rises high above the trunk like an accessory of the Batmobile. This was Chevy’s first functional carbon fiber spoiler when it was introduced, and it provides the same benefit as 300 lbs of ballast at 150 mph – allowing all 650 lb-ft of torque to transfer to the pavement at any speed.

Suspend Your Disbelief – the ZL1 1LE Is Legit

All that aero won’t mean much if the suspension can’t handle the car’s weight at speed, so the ZL1 1LE features changes from the ground up, all meant to supplement the already-laudable handling characteristics of the ZL1 Camaro. No, really – the changes start right at the tire assembly with supercar rubber and forged aluminum wheels.

These rims provide the weight savings of low-density metal without compromising on strength – the forging process, literally hammering a block of aluminum into the shape of a wheel, results in a denser, significantly stronger product than casting molten aluminum into a mold. The base ZL1 has forged aluminum wheels, too, but the difference is the size – the ZL1 1LE’s wheels are 19” vs the ZL1’s 20”. This simultaneously reduces the un-sprung mass by 13 lbs (making it easier for the suspension to keep the rubber on the road) and cuts down on rotational inertia to enhance acceleration and braking, all adding up to better handling.

When wrapped in Goodyear’s Eagle F1 Supercar 3R rubber, those wheels help the ZL1 1LE achieve an incredible lateral grip result of 1.18 g in skidpad testing. How good is that? In Car and Driver’s testing history, only the C7 Corvette Z07 had done better at 1.19 g. Even supercars from Ferrari, McLaren, and Porsche are hard-pressed to hang on to the road, as well as the Camaro ZL1 1LE!

The 1LE package’s suspension upgrades tighten the screws even harder on the rigid ZL1. For starters, the springs are three times stiffer on the 1LE, and the rubber rear suspension bushings are replaced with aluminum pucks (yes, that stiffens the joint between body and suspension exactly as much as it sounds like it would). Next, GM’s signature MagneRide dynamic damping system with its steel-bodied hardware is replaced with a Multimatic aluminum-bodied spool valve damper set. This drops 23 lbs off the weight, while the spool valve design still enables variable damping force depending on speed and severity of the bumps. Then, by inverting the struts and mounting them in ball joints at the top end, Chevy enables negative camber adjustments for an even more race-like stance.

That’s not all that they’ve done to make the ZL1 1LE tunable to each track it runs on. Adjustable front spring seats allow the front ride height to be tweaked up or down. The rear stabilizer bar is adjustable to 3 positions as well, giving different options for anti-roll stiffness. The sum effect is a road car that’s 100% track-ready and fully equipped with an adjustable suspension for optimized performance on any track.

The changes add up to 62 lbs less weight than a base ZL1 with the same transmission, too. We’ll reiterate that road holding is up from the base ZL1’s impressive 1.07 g (M4 Competition, Corvette ZR1) to an astounding 1.18 g (911 GT2, Corvette Z06). The 0-60 mph time is still 3.4 s – the powertrain is the same, after all – but that incredible 10% increase in grip, along with easier braking, leads to lap times like a full 13 seconds faster on Nurburgring Nordschleife, with a 7:16.04 time that ranks in the top 30 of all production cars, right in between several 911 Turbo S runs and the Lexus LFA and Porsche 918.

Keep in mind that the ZL1 1LE has an MSRP under $80,000; you may recall that the LFA sold new for nearly $500,000. To get any of those competitors in your garage for a remotely similar price, your best bet is to forget the market, just buy the ZL1 1LE, and race their owners for pink slips. 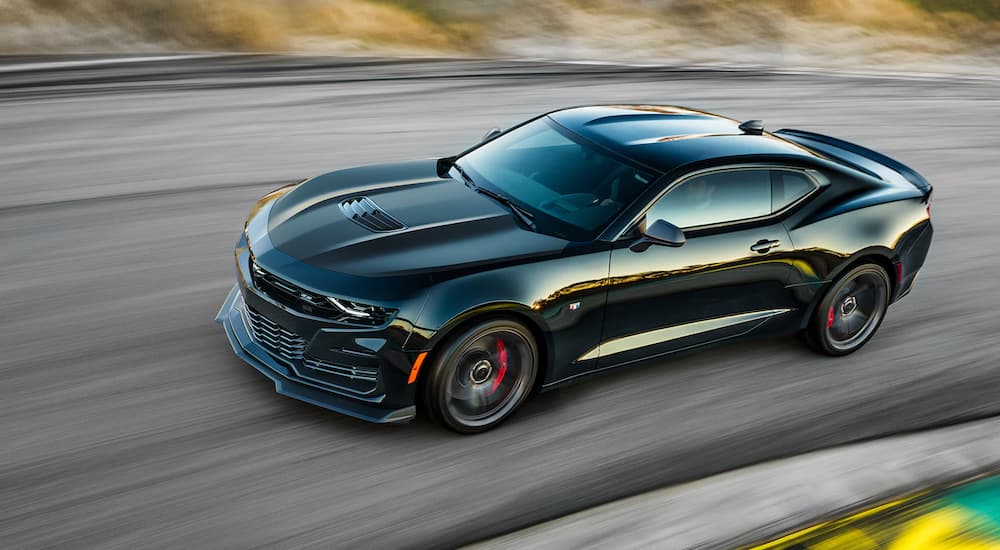 The Camaro has a reputation for being particularly impractical, with poor outward visibility and middling interior quality at best. What it continues to deliver in 2022 is the best performance-per-dollar numbers in the automotive industry. Nowhere is this demonstrated better than in the Camaro’s ultimate incarnation, the ZL1 1LE. In terms of performance results, this is one of the best track-ready production cars ever made, and it’s marked to sell for less than half the price of renowned sports cars with similar capabilities. Not a lot has changed for the 2022 model year, but when you’ve already got the formula solved the way Chevy has, what more is there to do?