It’s not uncommon for automakers to either turn a consumer production vehicle into a racing edition, like the Ford Escort or the Toyota Corolla. Likewise, it’s not uncommon to take a vehicle built for racing and homologate them into consumer production versions, like the Ford GT or WRX STI. Interestingly enough, the Chevy Colorado ZR2 entered the racing sphere the same year it was made available as a consumer production model. But the question remains: How big a difference is there between what you get from the 2022 Chevy Colorado model year and what’s under the hood (or frame) of the award-winning Colorado ZR2 racing model? Well, that’s what this article explores today.

Part of the big pitch for each new model year of the Chevy Colorado ZR2 trim is how race-ready it is for off-road traversal. Multiple drag races and popular jump tests have showcased the ZR2’s capabilities across various YouTube channels, making it look every bit as capable as its racing counterpart. But what are the real differences, and how many of those differences are there between the racing model and the consumer model? Well, let’s deep dive into it.

A Difference in Frames

The 2022 Colorado ZR2 is part of the second generation of Colorado midsize pickup trucks from General Motors, built on the GMT 31XX platform for midsize SUVs and pickups1. The platform is designed to house GM’s Duramax turbo-diesel engines of the 2.5 and 2.8-L variety, and the V6 engines of the 2.5 and 3.6-L variety. The Colorado’s entire trimline, as well as the GMC Canyon‘s entire trimline, share the GMT 31XX platform. For the consumer version of the Colorado ZR2, that puts its gross vehicle weight rating around 6,000 lbs.

The Chevrolet Performance racing edition of the Colorado ZR2 is actually built around the 2.8-L Duramax turbo-diesel. It’s a custom frame of the Colorado designed specifically for racing with less weight in the front, more in the back, along with a custom leaf-spring suspension made specifically for the trials and tribulations of off-road racing2. It has a wider track than the stock Colorado, even though it’s based on the same axle design. They also built all new control arms and added a steel driveshaft for the racing edition of the ZR2.

In many ways, it makes sense why the frames would be different between a race model and the consumer production model, because obviously there’s a difference in safety. The race model will have a roll cage and all of the unessential amenities removed. No plushy interior trimming, nor large infotainment displays; no heavy fabrics, nor convenient console stacks. Weight reduction is a big part of racing, and so obviously this is where a large part of the framing differences will come into play between the race model of the ZR2 and the consumer production model. Of course, everyday drivers and enthusiast drivers probably appreciate the comfort amenities in the production model ZR2—for when they aren’t tearing up the dunes or leaping over large sand gaps. Race-Quality Damping in a Production Model

While the frames may be different for the purpose of racing versus street-legal driving, there is a lot of carry-over from the racing model’s suspension to the consumer model’s suspension. The biggest selling point between both iterations of the Colorado ZR2 is the inclusion of the specially designed Multimatic Dynamic Suspension Spool Valve dampers. These include a pair of spool valves with oil reservoirs in order to provide better shock absorption and stiffer response mechanisms for the harshest shunts, jumps, and bumps.

The Multimatic DSSV dampers operate on a three-chamber principle, which includes the main shock shaft, a chamber for standard on-road compression responses, and a third chamber for off-road compression. The electronically controlled fluid reservoirs kick in from the third chamber when compression exceeds what the second chamber is capable of handling, dampening the rebound of the suspension and giving drivers and passengers alike a much smoother ride, no matter the on-road or off-road conditions3. It’s a seamless transition built around off-road racing principles, but available in a production model midsize pickup truck.

The 2022 model year Chevy Colorado retains this feature in the ZR2 trim, so you’re getting very similar levels of suspension travel, damping, and rebound stiffness that you would in the racing model. The racing model, however, has slightly longer shafts on the damper, improved seals, and custom spool valves—as part of the rear jounce shock system designed for the non-stop abuse an off-road racing truck undergoes in the heat of competition. Still, the fact that the racing model is based on the stock shock and damping setup of the production model means you’re getting very similar levels of performance as found in the off-road racing truck.

So why stick with stock for an off-road racing model? Well, according to an older interview with the engineering group manager for General Motors’ off-road motorsports integration, Tom Gierman, they wanted to “race what we sell.” It’s a great argument—and certainly, one that helps sell the value of the ZR2 for off-road enthusiasts looking for a quality off-road machine that can handle all the ins and outs that the racing model can withstand.

Oftentimes, the upgrades and improvements to racing models include specifically tuned engines that swap parts here and there to get more boost out of the block and more horsepower out of the plant. Larger exhaust headers, custom intercoolers, multiple turbochargers, all-new intake….That’s what you typically expect from a racing model, right? Except that’s not quite what they did with the Colorado ZR2’s racing edition.

In fact, the only thing they modified for the racing model ZR2 was adding a performance-enhanced air intake and performance-enhanced exhaust for the engine. The crazy part about it is that those are available options you can get with the production model ZR2 right from the dealer or any aftermarket outlet. Essentially the powertrain performance parts in the racing model ZR2 are the same ones you can have installed on the production model. 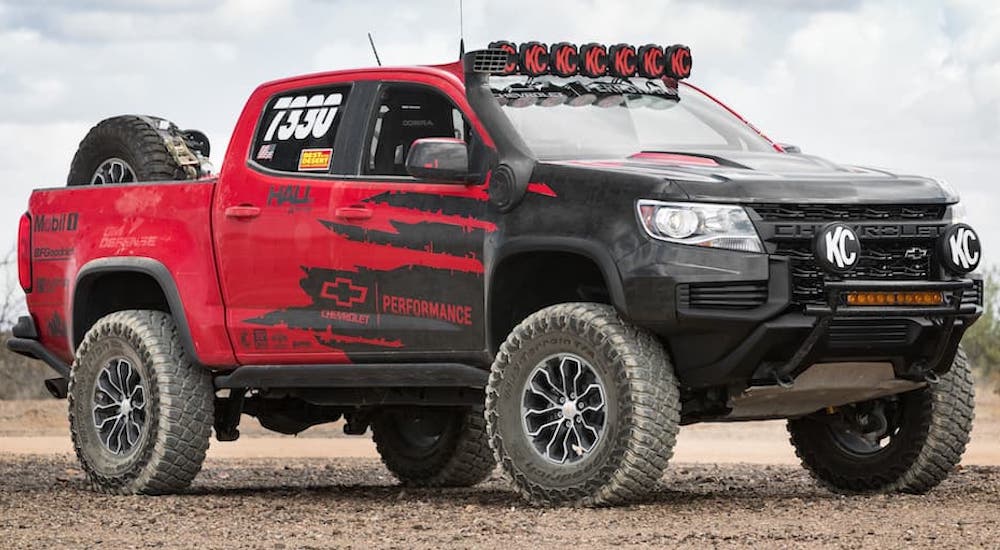 While the racing model ZR2 may have modifications and changes made to make it more capable for unforgiving off-road races, it still shares a heck of a lot in common with the standard production model ZR2, including the 265/65R17 Goodyear Wrangler DuraTrac tires matched up with the AEV off-road extreme terrain wheels. Those come standard on the production model ZR2. Plus, if you really wanted to spruce up the racing profile of your Colorado, you can even have an AEV spare wheel installed.

One thing worth mentioning is that even if you don’t have a ZR2 model, exclusive to the 2022 model year Colorado, you can actually have the Trail Boss package for the LT trim come equipped with some of the ZR2’s accessories, including the wheels, skid plates, and leveling kit. Another neat thing about the Colorado is that if you really want to match up your midsize pickup with racing-tier performance, you can buy all the kits that allow you to upgrade the production model with the racing model-tuned parts4 (assuming that was something you were interested in). But, it’s still pretty cool to see how similar the production model Colorado ZR2 is to the racing model, and how with each new model year, including the 2022 Chevy Colorado, you can bring more and more of that racing culture into the other trims like the LT—with more accessibility than ever before.