These days, current auto news bears no absence of hybrid and EV-centric headlines. As evidenced by the L.A. Auto Show, Consumer Electronics Show and NAIAS (as well, we expect, by the upcoming industry shows in both Chicago and Geneva) there are two major areas of focus for automotive R&D teams. The first, and slightly-less accessible, comes in the form of autonomous self-driving technologies. And while we expect plenty of advances in that area over the next decade, automobiles that provide a more sustainable alternatives prove most immediately relatable.

The last decade-and-a-half has represented a paradigm shift in the priorities of the entire automotive industry. Sure, there has been a fair share of offerings designed to do battle in the horsepower wars of late, but those can largely be attributed to less-than-a-handful of automakers, with most refining their lineups to focus on hybrid, EV and/or crossover offerings.

And in this attempt to pacify evolving sensibilities, automakers are faced with challenges beyond their control. Sourcing of battery components, production of said batteries and the competitive need to equip your vehicles with the most impressive range and competitive fuel economy.  Factor in traditional demands as to comfort, cargo and design and it’s easy to see why a refinement of focus was necessary.

But among the offerings whose launches have managed to grab headlines, it’s KIA who seems to be carving out a surprising niche, thanks to their EV offering, the Niro (as well as its plug-in hybrid variant).

But what is it about the Niro that has so many people talking?

Here are just a few of the highlights, when it comes to the Niro’s primary selling points:

But truth be told, these stats do little to sell the Niro outside of the sustainability-minded consumer base. And while, let’s be honest, we’re still at a relatively low rate of conversion to EV offerings these numbers are among some of the most impressive electric numbers in the segment. 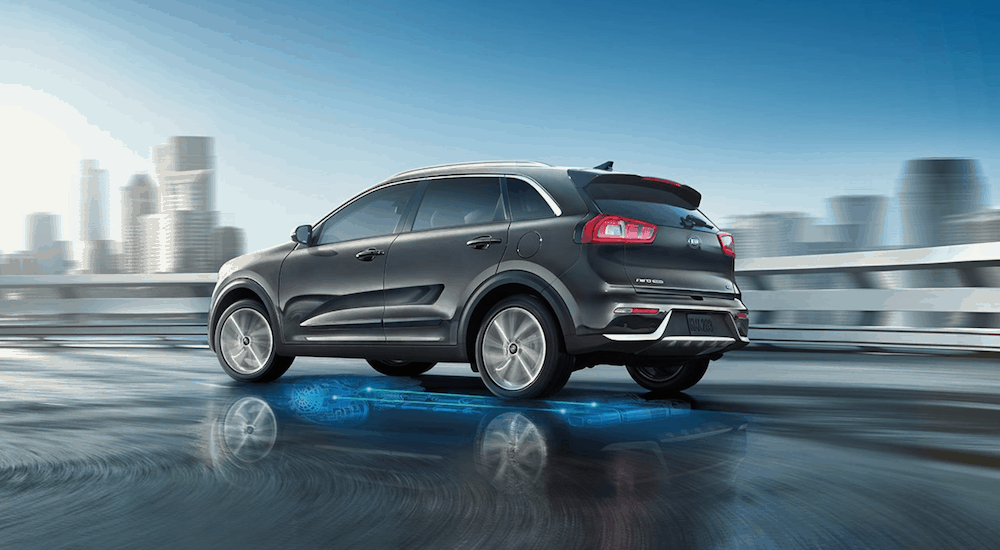 All right, let’s be clear. When it comes to body style, it feels unfair to label the Niro as a traditional crossover and we’ve been critical of far too many journalists who have. Let’s call a spade, a “spade”. The 2019 KIA Niro is a wagon…and in our minds, that’s a good thing!

While the oversaturated crossover segment feels devoid of inspiration, and character, when it comes to design theory – the Niro’s bold stab at wagon aesthetics feels like a real winner. With a distinctive front end, low-crouching athletic stance and contoured body panel it might best be described as having a ‘sport wagon’ design. But it also breathes the sense of freshness that seems to permeate this newest generation of offerings. In other words, there are elements that feel fashion-forward, complimenting an expectation of evolving technology.

The expectations of today’s car-buyers have helped to fuel the aggressive integration of technology that we’ve seen in recent years. Hands-free laws, for example, have prompted the standardization of Bluetooth connectivity. Now, it has become an expected feature. The same could be said for smartphone integration, be it for Apple or Android devices.

The Niro answers both of these expectations but also provides a welcome wireless charging cubby and the ease of a 7-inch touchscreen interface for the infotainment system. Jump up to the EX premium trim and you upgrade to an 8-inch screen along with an 8-speaker Harman/ Kardon sound system.

Combined with the Niro’s leading stats, inspired design and a relative lack of in-segment competitors, it’s clear that KIA has established a winning formula with plenty of potential for long-term payoff. And there’s no arguing the need for such a strong position, considering what’s on the horizon.

Coming Down the Pipeline

Steve Kosowski, Manager of Long-Range Strategy for KIA Motors America notes the challenge posed by discussions of range. “What’s over the horizon, maybe 12 to 18 months away, is a tsunami of 300-plus mile cars, “ he explains, referring to the industry as a whole. And with billions of dollars being poured into the reduction of their carbon footprint, KIA makes no secret of their desire to be among the leaders. A lofty goal, for sure, but there’s no arguing that the Niro is a good place to start.

With a total range of 239 miles, the long-range Niro EV claims the Hyundai Kona as its closest (if not only) in-class competitor. Besting Niro’s range by 19 miles, the Kona’s advantage is largely negligible in the long run, but a 4-inch length deficit minimizes the Kona’s in-cabin potential. And while it’s worth pointing out that the two vehicles have roughly the same powertrain, let’s explore sizing a bit further. With seats folded down, the Niro manages to serve up an additional nine cubic feet of storage, and as much as four inches of passenger legroom. And while it’s a weighted comparison, leaving individual consumers to decide which point-of-debate is most important to them, there’s little point in arguing KIA’s ability to deliver a competitive product. And it appears that KIA’s production capabilities do little to pacify the immediate demand.

While it may not be my cup of tea, there’s something compelling about the 2019 KIA Niro EV. In almost every aspect it displays a thoughtfulness, and a clarity of intent reflected in KIA’s execution of the finished product. Certainly deserving of applause, it’ll be interesting to see how far KIA’s strategy takes them in what we can expect to be the Uber-competitive years to come.