The 2022 Honda Civic kicks off a new generation of Civics, and Honda has announced a new Civic Type R will drop in 2022 as well. Enthusiasts are eager; the Civic Type R has garnered a loyal following, and for good reason. The hot hatch has made a great case for the FWD sports car that is practical enough to be a daily driver. The zippy Type R is an award-winning, record-breaking vehicle that’s as well-suited for backroads as it is for the racetrack.

In 1997, the sixth-generation Honda Civic became the first Civic to be Type-R-ified. It was assembled and sold in Japan exclusively until 2000. Known as the EK9 by Honda enthusiasts, the three-door hatchback donned the iconic red Honda badge that is now synonymous with a high-performing sleeper. It is loud, lightweight, fast, and, in this writer’s opinion, the cutest Civic Type R to date. The body is significantly lighter than its current incarnation at roughly 2,300 lbs, and the seam-welded frame has the rigidity to support all those extra ponies.

The hand-ported I4 engine comes standard with a helical LSD and is only a 1.6-liter, but at the time, it was a game-changer, boasting 182 hp and 118 lb-ft of torque. The car has a 0-60 mph acceleration time of 6.7 seconds and a maximum speed of 140 mph. The EK9 remains engaging to drive, with a racing-style, close-ratio 5-speed transmission, and the red RECARO bucket seats don’t hurt, either. Of course, all of this is jarringly juxtaposed with the very economy-style-hatchback exterior, all soft edges and no-nonsense. Not to mention that little ducktail spoiler – like I said, cute.

In 2001, the second generation of the Honda Civic Type R was introduced, this time in the European as well as Japanese markets. However, both variants were now manufactured in Swindon, England. They have a larger 2.0-liter engine with 6-speed manual transmission. Europe’s version of the EP3 lost some of the coveted racing-friendly elements that are standard in the EK9, including the helical LSD and those sweet, sweet RECARO seats. The Japanese version includes both of these features and has a more powerful engine with 212 hp versus the European version’s 197 hp. The last year of production for the EP3 was 2005.

The Honda Civic Type R was back in 2007, again with two versions: the FD2 for the Japanese market and the FN2 for the international market (though it still never made its way to America). The FD2 and FN2 are different enough that they can really be considered two distinct models, even though they were produced at the same time.

The Japanese FD2 made Type R history by being the first version offered as a 4-door sedan instead of as a hatchback. It also has a wider wheelbase that supports higher output of 222 hp. Despite the different body style and higher power output, the FD2 is more lightweight and stays truer to the racing reputation established by the Type R.

The three-door hatchback FN2 gets 198 hp and was offered in several different trims. One of which, the Type R GT, has an air-conditioned glovebox (why? we’re not sure). There’s also the Type R Race, the trimmest trim that shaved off nearly 90 lbs by scrapping certain components (including the air-conditioned glovebox). Honda discontinued production of this Type R in 2011 due to the impending implementation of new emission standards. 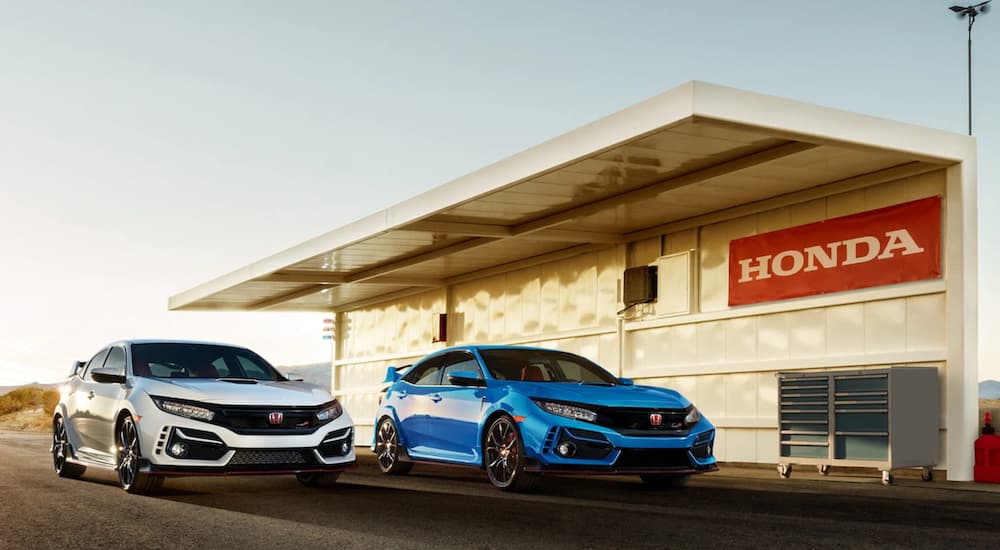 After a long hiatus, the fourth generation of the Honda Civic Type R, the FK2, debuted as a 5-door hatchback at the Geneva Motor Show in 2015. It’s the first Civic Type R to be powered by a turbocharged I4 engine, bumping the horsepower all the way up to 306 ponies. It scored a record-breaking lap at the Nurburgring with a time of 7 minutes and 50.63 seconds. Its improved performance was backed by a sportier exterior, featuring a flamboyant wing spoiler, narrowed headlights, and tapered front end. The updated engine was manufactured exclusively in Honda’s largest plant in Anna, OH, before being exported to the UK, where the rest of the car was built.

In 2017, the FK8 became the first Honda Civic Type R to be sold in the United States. It marked its return in a big way – by demolishing the FWD record for the Nurburgring lap with a time of 7 minutes and 43.8 seconds. It has the same turbocharged I4 engine from the previous generation, with 306 hp and 295 lb-ft of torque that work in tandem with improved aerodynamics to achieve a maximum speed of 169 mph, making it the fastest Civic Type R.

Visually, it’s based on the tenth generation of Honda Civic and has a very busy exterior that some criticize as being un-Civic-like with not one, not two, but three centralized tailpipes and several dummy vents (gag). You hate it, I hate it, we all hate the look of the new Honda Civic Type R. Obnoxious aesthetic aside, it’s 3121 lbs of pure high-performing ingenuity. This is the first generation of Type R to feature Honda’s LogR smartphone app, an exciting development that allows users to track the performance of their Type R via three functions:

Honda listens to its consumers and has proven to be especially in tune with the Type R fandom. They asked: What’s with all the fake vents? Honda listened: We’ll take (some) of them out. It’s overheating on the track! Here you go, improved cooling systems. The exterior looks like the result of a bunch of teenagers in a room with a pad, pencil, and pixie sticks! Well, we’ll see how Honda answers to this feedback with the redesigned 2022 Type R.

If the 2022 Honda Civic is any indication, it’s likely to be toned down a decibel or 2,000. The newest Type R is gearing up to be a racetrack-ready crowd-pleaser, with decades of customer feedback and research and development coming to fruition. It’s also expected to be the last non-hybrid vehicle produced by Honda; earlier this year CEO Toshihiro Mibe announced Honda’s commitment to producing only EVs by 2040. The Last Chapter in a Really Great Book

The sun is setting on the combustion engine that has drawn millions to the track with its raw strength and explosive power. The manual transmission is a dying breed as well, much to the dismay of enthusiasts who enjoy the interactive gear shifting and increased connection with their car. However, Honda has proven that ingenuity doesn’t necessarily mean disengaging – the LogR app is a testimony to that. Who knows, maybe the 2022 Honda Civic Type R won’t be the last we see of this fan-favorite – if anyone has the adaptability to create an EV sports car that revs the engines of the masses, it’s Honda.