SUVs are more popular than ever before, and nowadays, we can expect more manufacturers to develop lineups in efforts to compete with each other. Although there have been numerous comparisons between SUV lineups over the past few years, there’s something special about pitting the 2021 Cadillac XT5 vs 2020 Acura MDX. What separates these two SUVs from a wide majority of the competition is their place as luxury vehicles, which is only exemplified by the big-named brands that produce them. Despite all of the differences that these two SUVs have, the 2021 XT5 and 2020 MDX are alike in many ways. Both of these manufacturers have the same goal in mind for the same kind of driver. However, only one of these vehicles manages to be the ideal choice at the end of the day. When it comes to providing a luxurious experience, the 2021 Cadillac XT5 manages to impress with its interior, while the 2020 Acura MDX makes up for it in other ways.

Starting with the base trim for each model, the 2021 XT5 starts at an MSRP of $43,995 for its base trim, known as Luxury. This trim includes a host of features, many of which are absent on the base model 2020 MDX, which starts at an MSRP of $44,500. The XT5 is offered in two different trim levels other than the base model, these being Premium Luxury and Sport. For the MDX, you’ll be able to add additional packages to further enhance the vehicle’s appeal, with a majority of the changes being found in the interior. Even when sticking with the base MDX, Acura provides an ample feature set that includes a few features omitted from the XT5. When it comes to features that more drivers are likely to use, however, Cadillac has provided some of the very best. Performance: Are They Comparable?

Both the 2021 XT5 and the 2020 MDX can be fitted with two different engines. However, those looking for a turbocharged engine for increased efficiency will be drawn towards the XT5. Drivers who are interested in driving a hybrid model, also for fuel-efficiency, will have to choose the MDX. Both engines for the XT5 are paired to a 9-speed automatic transmission, which is also the standard for the base engine in the MDX.

As mentioned, both the XT5 and the MDX each offer an additional engine option within their lineups. For the XT5, this is a 3.6L V6 that manages to get better performance than the V6 found on the MDX, producing 310 hp and 271 lb-ft of torque. Unfortunately, the XT5 is not currently offered in a hybrid variant. But the MDX has an available 3.0L V6 that is paired with an electric motor to produce 321 hp and 289 lb-ft of torque. As is the case with hybrid models, this engine grants the MDX EPA-estimated ratings of 26 MPG city and 27 MPG highway.

Although the hybrid variant will be appealing to those looking for the most fuel-efficient of the bunch, it comes at a substantial premium. With a starting price almost $10,000 higher than that of the XT5’s efficient turbocharged engine, we find it difficult to justify the added cost – especially given that it is not a particularly efficient hybrid, to begin with. Overall, the XT5 turbo is the best option for drivers who desire economy, while the XT5 V6 is in the lead for those who prize performance.

The most notable difference between the XT5’s interior and the MDX is the seating capacity. Owners of the MDX will have the choice of opting for a six or seven-seat arrangement depending on the chosen style of chair, but this comes at the cost of leg and headroom. In comparison, the XT5 has a maximum passenger capacity of five but ultimately manages to be a more comfortable fit.

Sitting in the front row inside of the XT5 will give you 39.7 inches of headroom as opposed to 38.1 inches on the MDX. Even in the second-row, the XT5 gives passengers 38.4 inches of headroom instead of the 38.3 inches in the MDX. Legroom is highly similar between the two for the first row as the XT5 grants the driver and passenger 41.2 inches of legroom compared to the MDX’s 41.4 inches. In the second row, however, the XT5 gives passengers 39 inches of legroom while the MDX only provides 36.6 inches (the MDX Hybrid further reduces that to 3.6 inches).

Each of the vehicles makes good use of the materials that make up each cabin, and both include an array of luxury features. Firstly, both vehicles provide power-adjustable seats for the driver and passenger, although some may appreciate the greater flexibility the MDX offers. Those who prefer the best media experience should opt for the Cadillac XT5 as its standard premium audio system from Bose provides audible clarity in your music. Acura provides an in-house audio solution with the same number of speakers, but Bose remains king in the audio realm. In the higher trims, XT5 offers up to 14 speakers, while the MDX tops out with 12 speakers. 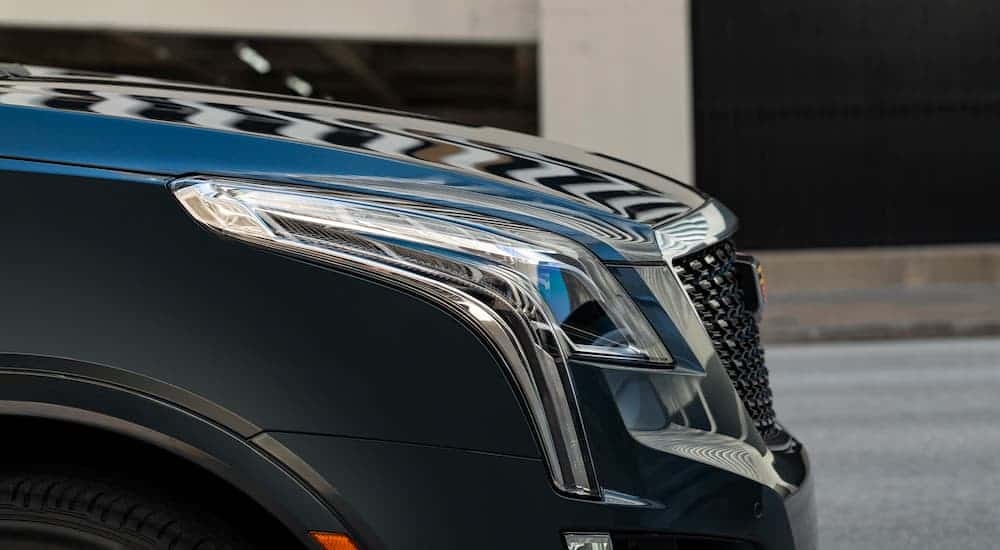 Which One Should You Choose?

Cadillac and Acura have both done an admirable job producing the likes of the 2021 XT5 and the 2020 MDX. Although both vehicles have the same goal in mind, Cadillac’s offering is ultimately the more tempting one. Although the MDX provides ample performance, a hybrid option, and an enticing interior, it lacks too many features that are present in the XT5 to warrant its much higher price tag. A majority of the most notable changes are noticeable once you consider the luxury aspects.

Furthermore, the XT5 manages to include more sought-after safety features than the MDX, including the likes of Teen Driver, which is a revolutionary tool for teaching teenagers how to drive. A majority of the safety features found in the MDX are already present in the XT5, with the most noticeable exception being adaptive cruise control. Besides all of these differences, these two SUVs are equally as similar as they’re dissimilar. However, if you’re looking for a luxurious SUV with an equal amount of value and reliability, the decision between the two becomes clearer as the 2021 XT5 offers similar features at a much lower price.