GMC’s Sierra 1500 has long been revered by enthusiasts as a capable and versatile pickup, but in recent years it’s become fancier as well. The Denali trim used to be the most expensive and luxurious version of this truck, but this year there’s a new player in town. The Denali Ultimate promises an even more high-class experience, but how exactly does it deliver? To answer that question, let’s do a head-to-head comparison with the 2022 GMC Sierra 1500 Denali vs 2022 GMC Sierra 1500 Denali Ultimate and see how they differ.

What’s Under the Hood?

Fancy features are all well and good, but truck fans know that tech and style aren’t as important as power and capability. The Denali’s standard engine is nothing to sneeze at; the 5.3-liter V8 provides 355 hp and is a significant step up from the 1500’s most basic option (a 2.7-liter four-cylinder with 310 hp). But the Denali Ultimate comes standard with a 6.2-liter V8, offering an impressive 420 hp and 460 lb-ft of torque, making it hard to call it a “light duty” truck, even if it is still technically a 1500.

Another cool thing about the engine is that it doesn’t have to work at full throttle if you don’t need it to. It has a dynamic fuel management system that lets it adjust the number of cylinders it’s using to work efficiently depending on demand. So drivers can get the full power of the V8 if they need it but don’t have to waste fuel on using this monstrous engine just to cruise around town. 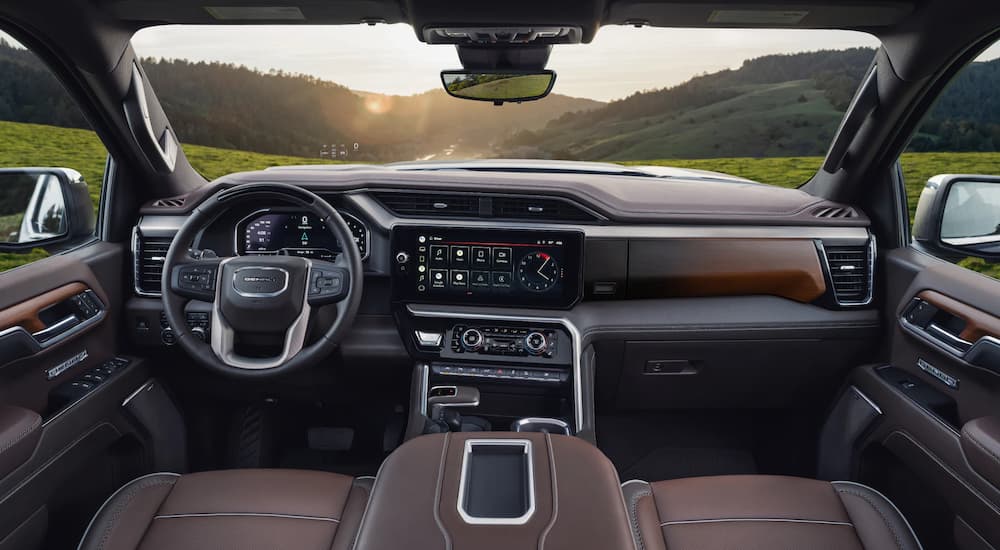 Style, Inside and Out

Capability is certainly the number one priority for most truck drivers, but let’s face it: everyone likes to drive in style. Take one look at the Denali Ultimate, and you’ll notice its signature Vader chrome grille. The GMC logo has gone over to the dark side, blending into the grille’s color scheme instead of standing out in its usual red, as it does on the Denali. The Vader finish on the grille, logos, and fenders matches the Ultimate’s exclusive low-gloss black aluminum wheels nicely, giving the exterior a cohesive look that somehow manages to convey both power and class.

On the inside, both the Denali and the Denali Ultimate use perforated leather seats and open-pore wood trim to create a cabin that’s both cozy and luxurious. The Ultimate Alpine Umber interior, available on the Ultimate, goes even further. A topographic pattern of Mount Denali is embossed into the leather in several places, and the GPS coordinates for the mountain are laser etched into some of the wood and aluminum accents, paying homage to the trim’s namesake. Perfect for shining some extra natural lighting onto the decor, a power sunroof is available on the Denali and standard on the Denali Ultimate.

Both the Denali and the Ultimate boast plenty of exciting tech features. Wireless charging pads let you power your devices without using any annoying cables, driver memory recalls two different settings for the adjustable seat so couples can easily share a truck, and a universal home remote has three channels that can be used to control garage door openers, security systems, and more from inside the cabin. But there are a few cool high-tech features that are either exclusive to the Ultimate or come standard instead of being an optional add-on.

Rather than being just another screen, GMC’s head-up display projects information onto the lower part of the windshield, which not only looks like something straight out of science fiction, it also puts info right in the driver’s line of sight. With adaptive cruise control, you don’t have to stop and reset your speed every time the driver in front of you slows down because the truck will automatically keep a certain following distance between it and the vehicle in front, adjusting the speed as needed.

One of the most important elements of any vehicle is the driver’s seat itself. The Denali’s 12-way power-adjustable seat is heated and ventilated for extra comfort in any weather. The Ultimate takes it a step further, with a 16-way adjustable seat that gives you even more control over your position. It even has a massage function, which feels like GMC going above and beyond to earn the right to call this truck “luxurious.”

The Denali comes standard with a Bose premium sound system that has seven speakers throughout the cab and a Richbass woofer to really let the sound quality come through. However, passionate audiophiles will have to upgrade to the Ultimate to unlock an additional five speakers, bringing the total up to twelve. That’s some serious surround sound, capable of turning any road trip into a mini-concert.

Can you really have a first-class pickup truck without a top-of-the-line tailgate? From hauling cargo to partying in football stadium parking lots, the tailgate serves many purposes, so these high-level trims are ready for anything. GMC’s multi-pro tailgate is standard on the SLE trim and above, so both of these trucks have the versatile inner gate and load stops that can help make the tailgate anything from an on-the-go workbench to a nice seating area with a footrest for extra comfort.

Unlike the Denali, the Ultimate comes standard with a CarbonPro carbon composite bed. Resistant to scratches, dents, and corrosion, this tough-as-nails material is ready for anything you have to throw at it. For getting into and out of the bed, the Ultimate has power-retractable assist steps that can be neatly tucked away when not in use.

But the feature that will really be the star of the tailgate party is the weatherproof Kicker audio system built right into the inner panel. The system is completely independent of the audio system in the interior, and you don’t need to have the engine running to use it. All the buttons and outputs you need are in the tailgate, so you can hook up your tunes with a USB cable, AUX cord, or Bluetooth connection and rock out without ever getting up from your seat. Of course, all of those extra features come with a higher price tag. The MSRP for the Denali starts at $62,800, while the Denali Ultimate’s starting MSRP is $81,900. That’s almost a $20,000 difference, which is a serious chunk of change. Of course, those in the market for a luxury vehicle are much more likely to have the means to spring for the extra features. Only time will tell whether the Denali Ultimate is popular enough with buyers to stick around for future model years of the Sierra 1500.

A Variety of Similarities and Clear Differences

While the Denali and Denali Ultimate have a lot in common, GMC has pulled out all the stops for the Ultimate, and it shows. The Denali is a very classy ride and is sure to impress many drivers, but the extra details that have gone into the Denali Ultimate are very cool. It may take some serious money to upgrade, but those who do will certainly have something to show for it. The rest of us will have to be content with marveling at what GMC has accomplished and wondering what they’ll have in store for the 2023 Sierra.