You don’t earn your off-roading stripes by shortcutting capability. Ford already knows a thing or two about building trucks that can handle all kinds of terrain and driving conditions, but until now, the Ranger seemed to languish in a less-aggressive state. We’re glad Ford put the spotlight on this midsize pickup because Ranger fans who don’t want to upgrade to a full-size F-150 have been chomping at the bit for a more rugged trim. Whether you’re buying from a NY Ford dealer or hitting the trails in southern California, the new Ranger Tremor is worth a second look.

The 2021 Ranger Tremor answers the call for a midsize off-road machine. Introduced as a package for the 2021 model year, the Ranger Tremor includes bigger 32″ all-terrain tires and a lifted suspension. You’ll also find plenty of additional off-road-friendly equipment, more than you’d expect for the package MSRP of just $4,290. Add it to the XLT and Lariat trims and enjoy the same 7,500-lb towing capacity and Ford’s highly capable 2.3-liter EcoBoost engine.

Midsize truck buyers are big fans of adding aftermarket equipment, but it’s always risky to add core components that aren’t factory-built. There’s the risk of incorrect installation, maintenance problems down the line, and an even bigger risk of voiding the factory warranty. The Tremor package eliminates the need for risky aftermarket gear by incorporating plenty of Ford-built and Ford-backed equipment from trusted sources, like Fox. Let’s take a closer look at the 2021 Ford Ranger Tremor’s core features and see why automotive journalists are giving it a thumb’s up for off-roading capability.

Not long ago, a four-cylinder engine elicited less-than-enthusiastic interest from buyers looking for off-roading prowess. But before you decide that a bigger engine is necessary, take a closer look at the specifications. Ford’s EcoBoost 2.3-liter four-cylinder engine puts out 270 horsepower and 310 lb-ft of torque, more than enough power to handle tough terrain and navigate steep inclines, and the standard 10-speed automatic transmission helps deliver torque when it’s most needed. If you want more muscle, Ford Performance is now offering a 320 hp and 355 lb-ft engine tune that maintains the factory warranty – how is that for power?

The 2.3-liter engine is turbocharged and features a dual overhead cam (DOHC) design. DOHC engines replaced traditional pushrod designs and work by creating a more efficient valve opening and closing process, eliminating inertia, and increasing engine power and efficiency. The “dual” designation means that one overhead cam is devoted to the intake valves, and one is focused on exhaust valves. This allows the use of variable valve timing (VVT), which further increases engine efficiency and output.

It’s a long, complicated explanation for why today’s four-cylinder engines output roughly as much horsepower and torque as a traditional V8 while delivering impressive fuel economy in the process. Engine manufacturing focuses on fewer parts, more efficient fuel delivery systems, and adjustable power to adapt to different driving conditions as responsively and efficiently as possible. The Ranger’s 2.3-liter engine, in other words, delivers plenty of power for the job at hand. 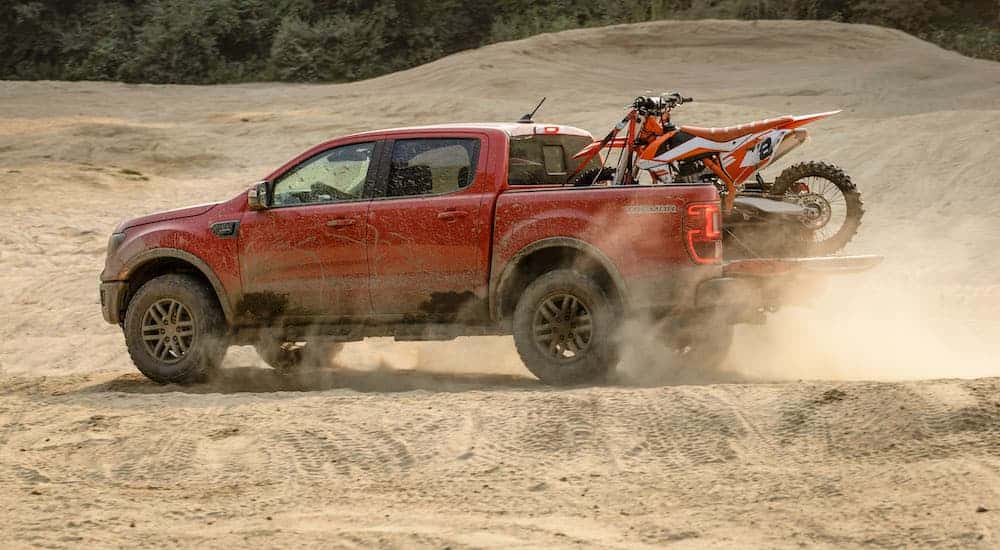 Most off-roading fans are particular about the equipment they want on their rig, but the Ranger Tremor is equipped with the goods to satisfy even the pickiest buyer. The lifted factory suspension adds nearly an inch of height, and the standard Fox 2.0 Reservoir damper and reservoir system is designed to support aggressive off-roading. Fox dampers are made of aluminum for durability and heat-resistance, and the reservoir system keeps the shocks cool by increasing fluid capacity and by using an internal piston to separate nitrogen from oil. This prevents aeration, which helps deliver consistent off-roading performance.

Traditional shock systems (like gas-charged systems) tend to experience shock fade in extreme conditions, which is an industry term that means the shocks essentially fail to do their job of dampening road bumps. Shock fade happens when foaming (or aeration) occurs as the nitrogen and oil mix together. The upgraded Fox Series 2.0 Reservoir system avoids this completely by increasing fluid flow for cooler components and less risk of aeration. It’s a complex system, but it’s designed to make off-roading easier.

Front coilovers and rear multi-leaf springs combine to deliver the best of both worlds, with the rear springs’ extra weight helping tires hold traction better, while the more compact coilover front suspension improves approach and departure angles, two important indicators of off-roading capability. The more stable leaf springs use friction to add to a planted driving experience, a good feature for the rear of the vehicle, and they increase payload capacity.

The major benefit to coilover springs is their extreme flexibility. Coilover springs avoid axle wrap, which is a complex mechanical problem that involves an unintended rotation of the axle housing (forward or backward) that feels like tire slippage – and can occur during extreme towing or throttling, and also when driving through uneven and challenging terrain. Axlewrap can cause broken springs or transmission issues and is a problem usually associated with leaf springs. By blending two different types of springs, Ford is getting the best of both worlds and mitigating the downsides of sticking with just one technology. The 2021 Ford Ranger Tremor includes a six-switch auxiliary power bank right on the dashboard, so operating winches or other electric-powered aftermarket equipment is easy and convenient. Other interior upgrades include special Tremor seats with ‘Tremor” embroidered on the headrest and special suede inserts. The exterior also receives special Tremor badging on the cargo box, along with an angrier, more aggressive grille.

The Tremor package also includes a rear electronically locking differential to keep even traction across both rear wheels when extra road grip is needed, as well as front and rear tow hooks and special skid plates that protect the Ranger’s underside and front end. In other words, the Tremor is an optimized Ranger that’s outfitted with Ford-built, Ford-backed extras designed for extreme off-roading capability. Ford includes its Terrain Management system in the Tremor package, allowing drivers to select from four different drive modes. The four settings include Normal, Mud/Ruts, Sand, and Grass/Gravel/Snow, customizing vehicle performance for the conditions at hand.

Ask any automotive journalist – or pickup truck fan – and they’ll tell you that the Ranger’s new Tremor Package makes it the best option out there for anyone who wants off-road capability and Ford toughness in a smaller package than the legendary Raptor. The Raptor will always be king of the hill in the Ford pickup truck lineup, but the Ranger is a compelling choice for a wide variety of off-road enthusiasts who desire a smaller and more affordable truck.

The Tremor Package builds off the Ford Ranger’s FX4 4×4 off-roading package and the FX2 4×2 package, giving buyers a few different packages to choose from, depending on budget and the truck’s intended use. Buyers that choose a 2021 Ford Ranger with the Tremor Package will enjoy a truck that’s wider, offers improved ground clearance, and better off-roading performance. They’ll still enjoy 7,500 lbs of towing capacity and a maximum payload of 1,430 lbs, which is plenty of capacity to haul that four-wheeler or dirt bike to even the most remote desert spots.