The 2022 Dodge Challenger is endlessly customizable, with dozens of trims, powertrains, colors, and packages that can make this vehicle feel completely unique even with all of its stock parts kept intact. It’s a force to be reckoned with that embodies the spirit of golden era American muscle cars. The packages offered by Dodge for the Challenger tend to focus on these elements, enhancing the vehicle while keeping true to its roots. For the 2022 model year, Dodge offers the following packages: the SRT Black Package, HEMI Orange Package, Blacktop Package, Performance Handling Group, Shaker Package, T/A Package, Dynamics Package, Widebody Package, and the 1320 package. Each one brings their own style to the Challenger, but not all were created equal. Let’s see how each package stacks up against the other and which has us the most excited about taking the Challenger on the road!

While several of the packages on this list are only options for one or two Challenger trim levels, the Blacktop Package can be paired with several: the SXT (including AWD), GT (including AWD), and R/T. Depending on the trim level, this package tacks on 20-inch Black Noise painted wheels wrapped in all-season performance tires. Other black accents are added around the vehicle in the form of the fuel door, rear spoiler, trim around the instrument cluster, and more. It’s mainly an appearance package, which is why it lands at the bottom of this list. It certainly adds an extra black-focused style to the Challenger, but doesn’t contribute much to its performance.

Blacked-out appearance packages are hugely popular right now, and Dodge would be remiss not to include a version of the Dodge Challenger that looks like it just rolled out of the Batcave. That’s where the SRT Black Package comes in. The Challenger gets blacked out from the grille to the exhaust for a truly menacing appearance. On top of that, it also displays the unique SRT Hellcat badging throughout its exterior, including the grille, fender, and spoiler, adding an even more aggressive appearance. It isn’t the most original take on a vehicle’s styling, but it complements the Challenger well. Dodge collaborates with Mopar for the T/A Package, available with the Challenger R/T and R/T Scat Pack models. Mopar contributes a cold air intake system, which helps improve the flow of cold air into the engine and boost torque and horsepower. This package also includes illuminated Air-Catcher headlamps, which also double as a cool air intake for the engine. Additional stylistic elements are added as well, in the form of satin black accents on the hood and decklid and houndstooth cloth performance seats for the R/T Scat Pack. The name itself is a nod to muscle car culture, taken from the Trans Am racing series, of which the Challenger is a staple at.

The Dynamics Package is only available with the Challenger R/T Scat Pack and focuses on wheels and brakes. The wheels are sized up to 20-inch painted aluminum wheels and equipped with all-season performance tires by Italy’s own Pirelli. Brembo contributes six-piston fixed front caliper brakes, which work differently than your average brakes found in passenger cars. Instead of having pistons on one side applying pressure to the caliper to clamp it over the rotor, fixed calipers have pistons on both sides (in this case, three on each). When the brakes are applied, the pistons themselves clamp onto the disc brake, making for a smoother and more reliable brake with the added stopping power a high-performance vehicle needs. This package is sure to appeal to drivers looking for a race-ready muscle car with unparalleled performance and control.

The Performance Handling Group and all its fixings are available with the Challenger GT and R/T, which means a very different package of offerings for each trim. For the GT, it’s equipped with high-performance features like Brembo four-piston fixed caliper brakes, high-performance suspension, performance steering, and steering wheel-mounted shift controls. The R/T builds on this with upgraded all-season performance tires, a line lock (great for burnouts), and a 3.90 rear axle ratio equipped with the TREMEC six-speed manual transmission. As you can see, high-performance is the name of the game with this package.

For this option, available for both the R/T and R/T 392, the front is equipped with a SHAKER hood, providing maximum air intake. In addition to this feature, the package comes with its own unique look, such as sleek black accents on the fuel door, grille, and rear spoiler, while the instrument cluster has a white trim. Under the hood is a SHAKER decal, and the front grille is decorated with the Challenger script badge. The SHAKER is the main attraction here, with the array of cosmetic choices in both the interior and exterior offering an added bonus.

A wide, aggressive stance is one of the things that makes the Challenger’s look so iconic. The Widebody Package beefs this up with bigger fender flares that add 90 mm to the vehicle’s stance and creates the extra space needed for track-friendly 20-inch wheels, coming in a variety of styles based on which trim you have, while the widebody competition suspension is tuned to allow the vehicle to perform at peak levels. Other unique features based on trim selection are the SRT power chiller for the SRT Hellcat Redeye and the super stock suspension for the SRT Super Stock trim. Unlike some of the other packages mentioned, this one is offered for more trims and has more trim-exclusive performance features, giving it a wider appeal. 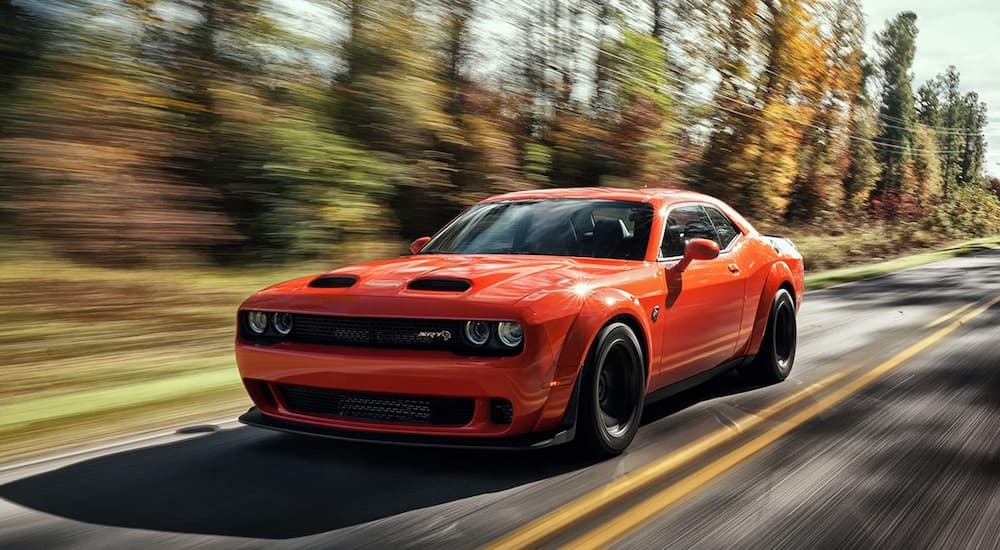 Orange is the keyword here when talking about this package; the color pays homage to the legendary HEMI engine and its early orange appearance. The iconic shade of orange can be found inside and out of the Challenger, most notably on the brake calipers housed behind glossy black rims. There’s HEMI orange badging and orange stitching throughout the interior on the armrest, console lid, steering wheel, and instrument panel. On top of all that orange, it also includes high-performance suspension, a performance hood with heat extractors, and premium comfort features like heated and ventilated seats and a heated, flat-bottomed steering wheel. When it comes to style, this package is truly unlike any available, with the orange accents giving it a sharp sophistication not seen on other models. If you’re looking to stand out, look no further than the HEMI Orange.

There are 1,320 ft in a quarter mile—the distance of choice for most drag races. The Challenger 1320, which builds off of the R/T Scat Pack trim, is built for explosive speed and quick acceleration. To cut out weight, only the driver’s seat is installed. Air-catching headlamps are included for increased airflow, and adaptive damping suspension with drag mode is part of the package as well. Drag radials maximize the Challenger’s grip on the track. The pièce de résistance is the added transbrake, which enables the Challenger’s engine to build RPMs while at a stop by having the transmission in first and second gear simultaneously. When the transbrake is engaged, drivers only need to use the paddle shifters to send the Challenger flying; using the brake pedal is unnecessary. The 1320 package stands out from the others in the way it transforms the Challenger’s performance, making a car truly built for the drag strip.

Self-expression can bleed into a lot of different aspects of our lives. How we dress and talk is part of how we project ourselves, just like the cars we drive can give strangers a glimpse into our personality. The person with the Challenger 1320? They’re adventurous, maybe a bit of an adrenaline junkie. The one with the SHAKER hood? They’re fun at parties. With the Dodge Challenger, expression comes easily. Regardless of which trim, color, or configuration of Challenger you’re dealing with, it’s sure to be a high-performing machine with unmatched style.